Belgian Block Curbing is a curb style that is not often seen and takes a seasoned concrete curb crew to install properly. With only a handful of these jobs installed in the local area, Belgian block curb adds elegance, character, and a sense of class to the area where it is installed.

Belgian block curb is typically utilized by land developers who want to create a more attractive development and really want to set its curb apart from the regular concrete curb found on most other roadways and streets. 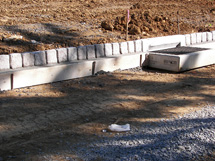